Moradabad: The Kingdom Of Brass

The Kingdom of Brass

Moradabad, originally known as Chaupala, is a major industrial city in Uttar Pradesh and also one of India’s largest export hubs. On the banks of the river Ram Ganga (a tributary of the great Ganges), it grew from a mud-brick fort into the city as we know it today. Moradabad is also often referred to as the ‘Brass Capital of India’ as the city is renowned for its brass work and has carved a niche for itself in the handicraft industry. The brassware is exported to countries like the USA, Britain, Canada, Germany, the Middle East and Asia.

Chaupala was earlier a stronghold of the Katehria Rajputs, however, very little remains of the settlement from this period. Under the Mughal Empire, Chaupala was the seat of a pargana (former administrative unit of the Indian subcontinent). It is mentioned in Ain-i-Akbari as being part of the ‘sarkar’ of Sambhal. It produced revenue of 1,340,812 dams (small Indian copper coin introduced by Sher Shah Suri in the 1540s) for the imperial treasury and supplied a force of 500 to the infantry and 100 cavalry to the Mughal army.

The modern city of Moradabad was established in AD 1625 by Rustam Khan, Mughal governor of Sambhal, during the reign of Shah Jahan. He named the city ‘Rustamnagar’, after himself, built a new fort and great mosque and pronounced the place his new capital. The fort and mosque still exist today and remain as one of the oldest historic monuments of the city.

Even though the monuments survived till the 21st century, the name ‘Rustamnagar’ however, was short-lived. It was soon changed to ‘Moradabad’, after Mughal Emperor Shah Jahan & Mumtaz Mahal’s youngest son Murad Baksh, and has been in use ever since.

In due course, Moradabad was annexed into the Kingdom of Rohilkhand by Ali Mohammed Khan in 1740. The city came under the control of Oudh State in 1774 after the fall of Rohillas in the First Rohilla War and was then conceded to the British East India Company by the Nawab of Oudh in 1801. In the early nineteenth century, the Rohilkhand area was divided among the Princely State of Rampur and two districts - Bareilly and Moradabad; Moradabad became the headquarter for the latter.

Brass - an alloy created by fusing zinc with copper that closely resembles gold – has been around in India since time immemorial. The craft as is practiced today arrived only 400 years ago. It was initially practiced by the ‘Thatheras’ of Jandiala Guru Community (a community of skilled craftsmen who specialize in the traditional technique of hammering brass and copper sheets into traditional utensils).

Later, the Muslim settlers in Moradabad introduced a replacement level of workmanship and manifested great patronage under the reign of Bahadur Shah Zafar. Over two centuries later, the British rule of India further promoted this ornate craft in foreign markets, creating its roots within the confines of our country’s heritage. In time, other immigrating artisans from Varanasi, Lucknow, Agra and many other places formed the current cluster ofbrassware industry in Moradabad.

The many fluctuations within the demand of brass items followed by the high cost of production have forced the manufacturers to produce aluminum and steel products which are comparatively affordable and in demand. Earlier the sheet craft was employed to handcraft a spread of things starting from ritualistic objects like panchpatras, Tamra Patra, sinhasanas, aarathi lamps (votive lamps), and deepalakshmi. But it has now moved on to more practical, home items like utensils, doorknobs, key chains, lamps, taps, trays, showpieces and toys. New technologies like electroplating, lacquering, powder coating, etc. have also found their way into the industry. 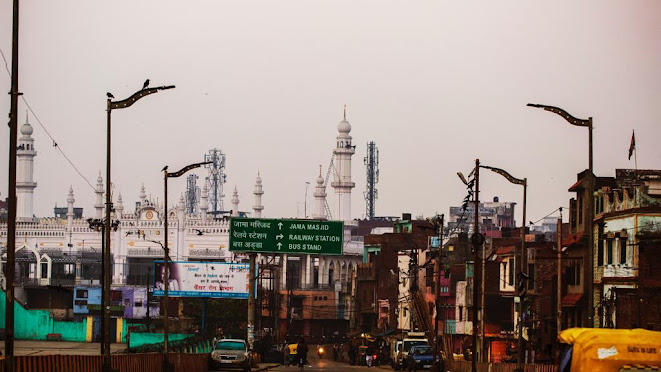 Moradabad has emerged as a major industrial hub in Uttar Pradesh. Modern, attractive, and artistic brassware, jewelry and trophies made by skilled artisans are the main crafts. Recently the industry has started producing other products like Iron sheets, Metal wares, Aluminium, Artwork and Glassware as per the demand of foreign buyers.

According to the Moradabad Handicraft Export Association, around 3,500 exporters are running their units in the district and about 5 lakh artisans are associated with it. Some of the artisans have manufacturing units and workshops in their own houses. Otherwise, different tasks take place in various small manufacturing units. These units consist of a furnace, moulding tools, polishing machine, etc. It is a low technology industry and is predominated by hand-powered labour.

In 2015, Moradabad was figured amongst the PM Narendra Modi's ambitious 100 Smart City list. Moradabad Development Authority (MDA) works alongside experts in the field of architecture, engineering and planning. They strive towards making this historic city into a modern landmark, preserving its heritage while accommodating the needs of our ever-changing society.

In ancient days, the present district of Moradabad lay in North Panchala which came within the bounds of ‘Brahmarshidesha’ (a stronghold of Vedic religion and culture). Sambhal has been a place of Hindu pilgrimage since early times and can be categorized as a cultural center and a seat of Sanskrit learning. 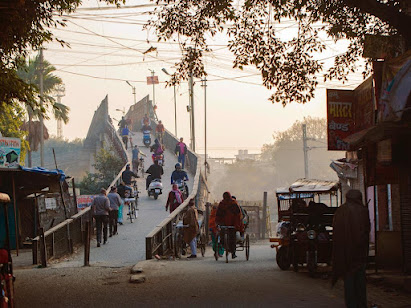 In the mid-eighteenth century, Urdu had taken precedence over Persian, most of the poetry in the district being written in Urdu. There are many Urdu poets and prose writers who flourished in the region during this time. Thus, enriching the roots and cultural fabric of the state.

‘Aalah’ and ‘Dhollah’ are the main types of folk songs that are sung to the accompaniment of musical instruments in the rural areas of the district, some other well-known types of such songs being sung on the occasion of certain festivals such as Dipavali and Holi. 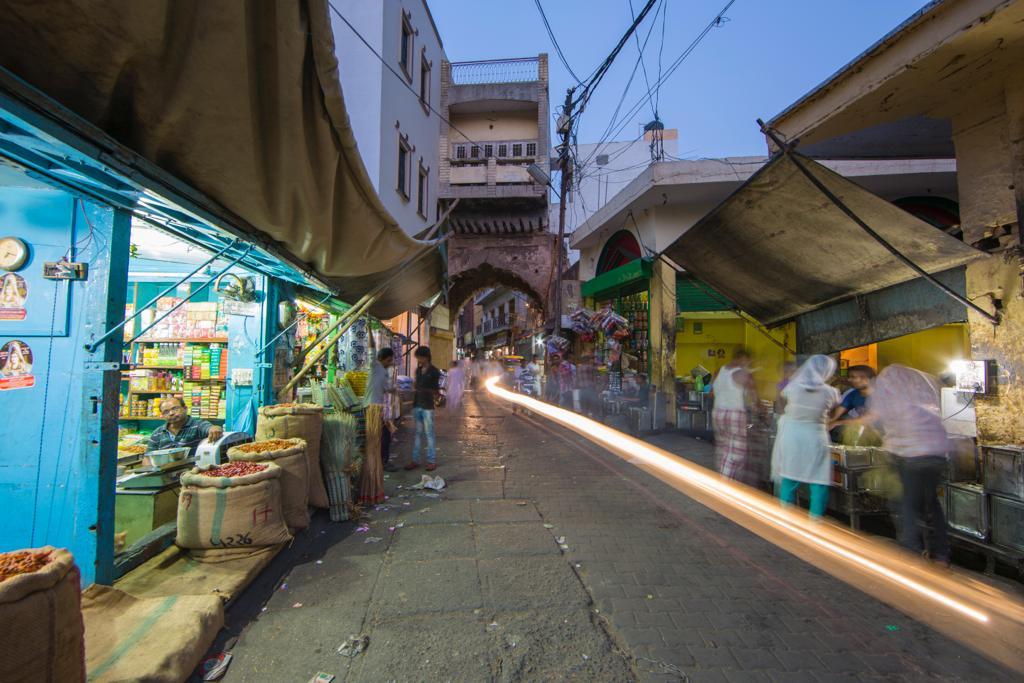 Moradabad is home to a diverse set of communities- The majority being Hindus and Muslims but with a significant population of Sikhs, Christians, Jains and Buddhists. Each religion has its age-old traditions and festivals. The people and the city celebrate this diversity, putting aside their differences. Some major festivals include- Ram Navami, Nag Panchami, Janmasthami, Diwali, Dussehra, Guru Nanak Jayanti, Lohri, Mahavir Jayanti, Christmas, Id-ul-Fitr and Id-ul-Zuha.

Uttar Pradesh’s culture is greatly influenced by its Urdu heritage and rich historical past. It is believed to be the land of the Nawabs, of Rama and Buddha. Moradabad culture is an amalgamation of folk art and dance forms. ‘Raslila’ is one of the foremost popular humanistic disciplines of the state. It owes its source to the drama act of Lord Krishna and his milkmaids. 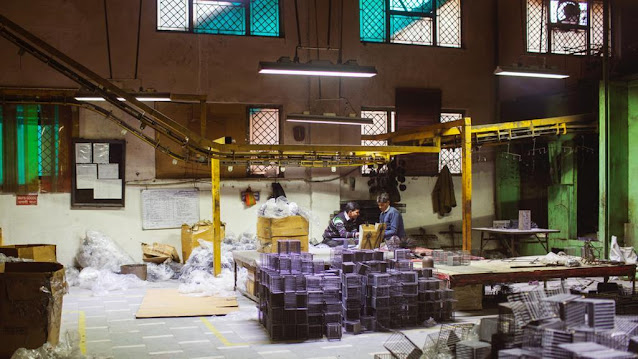 Moradabad is a major industrial city of Uttar Pradesh and one of India's biggest export hubs. The metalcrafts industry alone accounts for more than 40% of total handicraft exports from India. In the year 2020, the annual turnover reached ₹15000 crores out of which ₹10000 crores were export revenue. 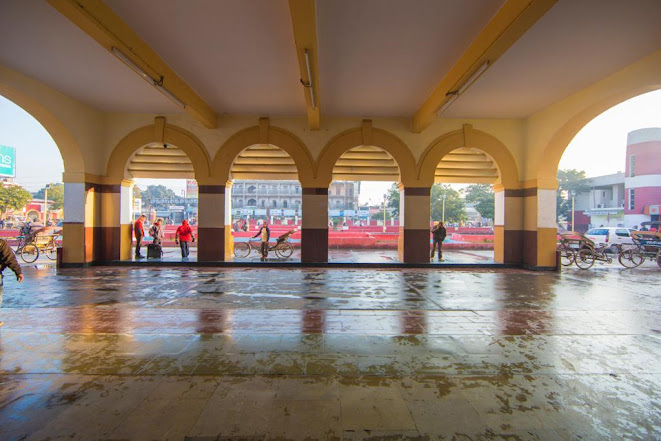 The Brass industry put aside, Moradabad has a lot to offer to anyone that arrives at its doorstep. If you are one who is awed by the simple charms of religious and historic cities, you will not be disappointed here. The city is home to both Islamic and Hindu cultures, preserving and upholding their essence. Some of the main temple attractions include Sita Temple, Bade Hanuman Ji Temple, Chandausi - Kunj Bihari Temple, Sai Temple, Pataleshwar Temple and Lord Shani Temple.

Owing to its famous Mughal lineage, one can find notable Islamic sites such as Najibudaulah’s Fort, Mandawar Ka Mahal and the Jama Masjid.

When in Moradabad, visitors can also visit the nearby ‘Chandausi’ ('chand' means moon and therefore, Chandausi is like a moon). This scenic town is located just 45 km away from Moradabad, it cultivates the mint plant at a large scale and their main product is mint oil. The town is also home to several religious sites such as Rambagh Dham, Kunj Bihari Temple, Lord Venugopal Ji Temple, and Braham Dev Ji Temple.

Also for all our history buffs out there, do make room in your itinerary for a visit to the Raza Library, a repository of Indo-Islamic cultural heritage. It was established in the 18th century and built up successively by the Nawabs of Rampur, and is now managed by the Government of India in the name of Raza Ali Khan of Rampur. It contains a  very rare and valuable collection of manuscripts, historical documents, specimens of Islamic calligraphy, miniature paintings, astronomical instruments and rare illustrated works in Arabic and Persian. Rampur's Raza Library also contains printed works in Sanskrit, Hindi, Urdu, Pashto, Tamil and Turkish, and approximately 30,000 printed books (including periodicals) in various other languages. It is one of Asia's largest libraries.

Touring an Indian city without indulging in their local cuisine, is like going to an amusement park and skipping the rollercoaster. After all the best way to get to know a city, is by its food. Moradabadi Biryani is known for its aromatic flavor and other delicacies include Mutton Curry, Masala Choley, Moradabadi Dal and Singharey Ki Kachri. 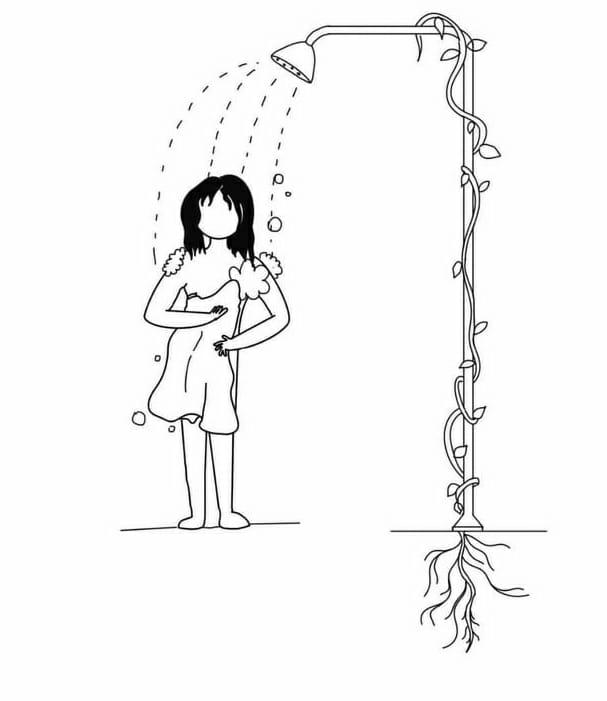